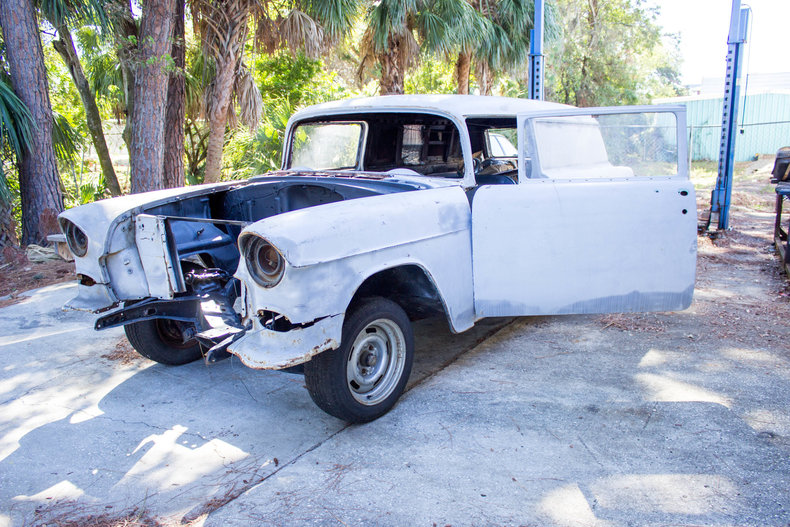 The 1955 Sedan Delivery was a 2-passenger, 3 window, panel delivery wagon.

The 1955 Chevrolet (sometimes referred to as '55 Chevy) is an automobile that was made by Chevrolet in 1955. It is considered a huge turning point for the manufacturer and a major success. It was available in three models: the 150, 210, and Bel Air.

The '55 Chevy was the first successful Chevrolet with an optional V8 engine. Chevrolet had produced an earlier car with a V8 in 1918 (Chevrolet Series D), which used a 36-horsepower and 288-cubic-inch V8, but it remained in production for only a year. In 1955, Chevrolet decided to fit its new car with an overhead valve V8 engine design, which was similar to the 1949 Oldsmobile "Rocket 88" V8 engine. The new 265-cubic-inch overhead valve V8 was designed to be smaller, lighter, and more powerful than previous V8s in the auto industry. 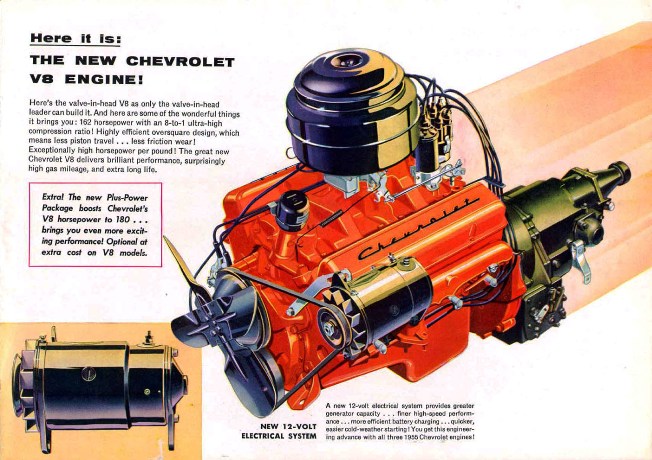 The new "small block" in the '55 Chevy had its problems. Some issues existed with cracked pistons, there was no integrated oil filter, and the factory could only add a bypass externally—owners had to opt for this external oil filter. The filter was also available as a dealer installed option. Those who did not order the engine with the "oil filter option" dealt with a high frequency of oil changes. This was corrected for the next year when a full flow oil filter system was added to the engine. The new small block V8 was relatively easy to maintain however to keep performance and mileage levels high required spark plug and ignition points to be replaced on a regular basis. The small block Chevy V8 became so popular that Chevrolet still sells it today as an over the counter replacement engine or better known as a "crate engine". There have been various changes made to the engine to modernize it since its introduction in 1954 however the basic design of the original 265 remains in place.

Additionally, Chevrolet drastically changed its body design. It had smooth straight panels on the sides and hood, wrap-around glass on the windshield, and triangular tail lights that jutted outward. And this new look, combined with new power and engineering, made the '55 an instant hit with the buying public and a critical success.

The car's popular "shoe-box" body style and chassis were carried over to 1956 (with changes to some of the front and rear aesthetics and bottom body line), and then carried over to 1957 (where the body was lengthened several inches in the rear and more drastic aesthetic changes were made).

The 1955 Chevrolet also offered many other firsts for Chevrolet, including changing from a 6-volt to a 12-volt electrical system. The '55 offered new options like air conditioning, power windows, power seats, power steering and power brakes. Other options included automatic light dimmers, door handle protectors, bumper protectors and "wonder-bar" radios. So many new options were available that some referred to the car as "Chevy's little Cadillac." Never before had so many options been offered for a car in the low-price field.

The 55's top trim offering was the Bel-Air, which had more chrome than the 150 or 210. The Bel-Air and 210 could be bought with a post between the front and rear passenger windows, or without a post. Without a post it was known as a "Hardtop," which came only in a two-door and was not offered in a four-door hard top until 1956. The two-door hardtop was also known as the "Sport Coupe." Since the Sport Coupe had no post between the two side windows, it had a slightly shorter roof and longer rear deck and was available with either the Bel-Air trim or the 210. Chevy also offered a convertible, with the same shorter roof and longer rear deck as the sport coupe, and it was offered in Bel-Air trim only.

1955 also saw the introduction of the Bel Air Nomad, a sporty two-door station wagon which featured frameless door glass and elongated side windows. The unique roof design of the Nomad came directly from the 1954 Corvette Nomad, a "dream car" designed to be shown at auto shows as a concept sport wagon. Although regarded as one of the most beautiful station wagon designs of Fifties, the Nomad sold poorly, partly due to its price tag (one of the most expensive models in the Bel Air lineup) as well as its lack of four doors. Also the Nomad's two-piece tailgate design was prone to let excess rainwater leak through to the interior. 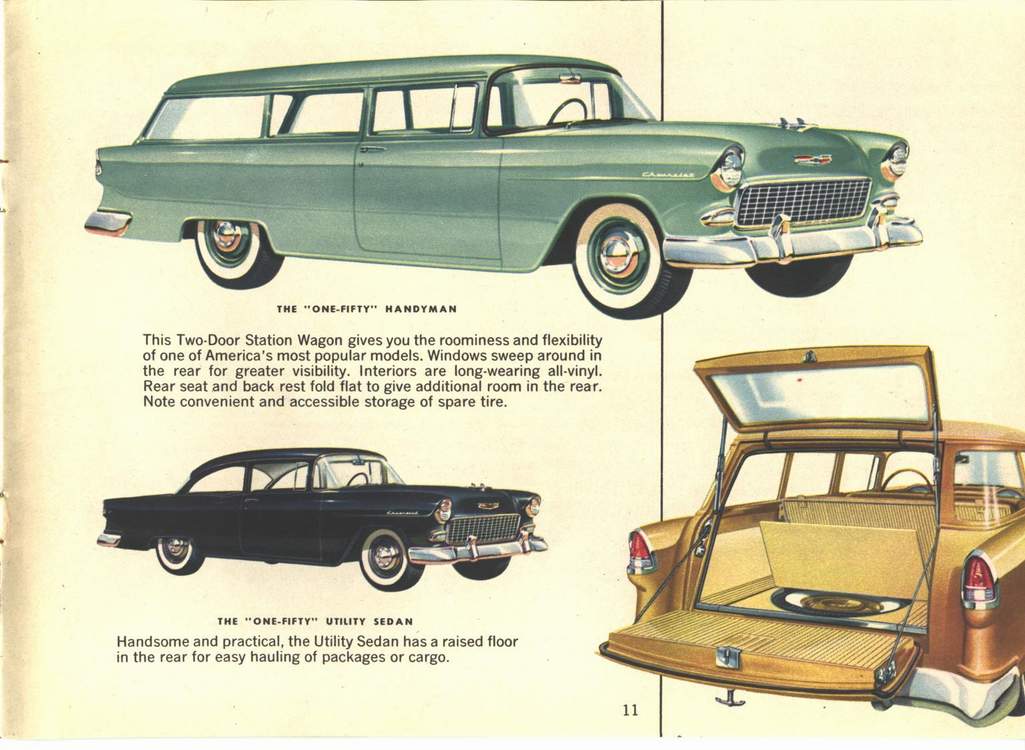 The '55 offered a wide array of colors. One solid color, which was standard for the 150, could be had for the 210 or Bel Air...or nineteen different two-tone color combinations were also available.

Along with a standard column-mounted three speed Synchro-Mesh transmission, the buyer of a '55 Chevy could specify an optional Overdrive unit to go with it, or the fully automatic two-speed Powerglide transmission. Although most everything was new in 1955 for Chevrolet, the reliable Powerglide was mostly unchanged from '54.

The One-Fifty was mainly conceived as a fleet model and little effort was spent marketing it to the average car buyer of the day, although sales weren't limited to fleets. It was most popular with police, state governments, small businesses, economy-minded consumers and hot rodders. Chevrolet sold substantially fewer One-Fifties than Two-Tens or the Chevrolet Bel Air in every year of its life.

True to Chevrolet's vision, the 150 was no-frills basic transportation. It had limited options, stark trim, solid colors, plain heavy duty upholstery and rubberized flooring. Small things like ashtrays, cigarette lighters and even mirrors were extra cost options. Compared to the mid-level Two-Ten or premium Bel Air models, the One-Fifty was stark and bland.

The Chevrolet Sedan Delivery, was part of the One-Fifty line, and was also designated the 1508 in the truck line. 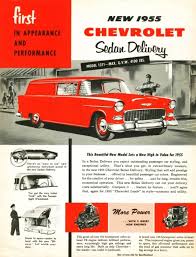 Body style choices were also limited to sedans, Handyman wagons (four-door in 1953–1954, two-door in 1955–1957) and (until 1955) the club coupe. The only body styles specific to the One-Fifty were decidedly fleet oriented, the sedan delivery (a 2-door wagon without rear windows and the rear seat removed) and the business sedan — a 2-door sedan with immobile rear windows and back seat removed. Powertrain choices were limited to manual transmissions and low output engines until 1954. In 1957, a full race-ready version was also available, commonly known as the "Black Widow" for its black-and-white paint color. It was equipped with 4-wheel heavy-duty brakes, 6-lug wheels and dual shock absorbers.