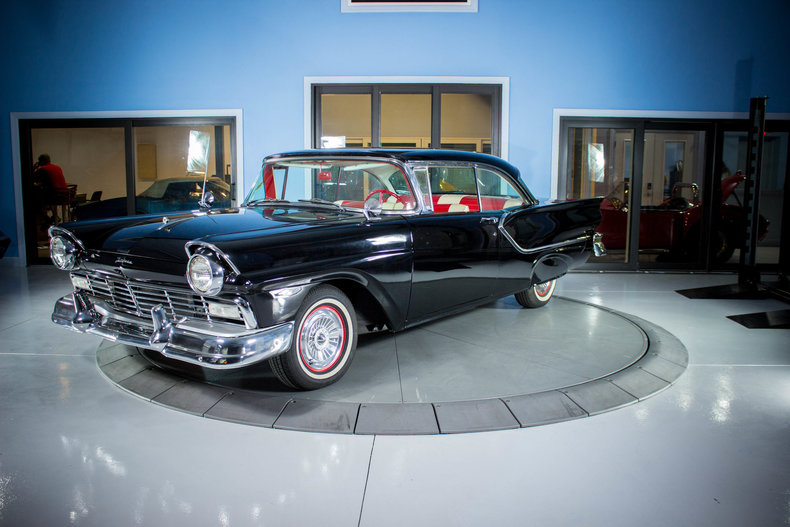 The mainstream Ford line of cars grew substantially larger for 1957, a model which lasted through 1959. The Crown Victoria with its flashy chrome "basket handle" was no more, and the acrylic glass-roofed Crown Victoria Skyliner was replaced by a new model, the retracting-roof hardtop Skyliner.

The new chassis allowed the floor to be placed much lower, which in turn led to a lower and longer look overall. The major component of this chassis was a differential whose pinion gear was exceptionally low relative to the axle shafts, lower than in conventional hypoid differentials.

The 1957 models retained a single-headlight front end like their predecessors, but were unmistakable with their long flanks and tailfins. A bunch of trim lines was introduced, starting with the base "Custom", "Custom 300", "Fairlane", and top-line "Fairlane 500". The two Custom lines used a 116 in wheelbase, while the Fairlanes had 118 in between the wheels. A new car/pickup truck hybrid based on the short-wheelbase chassis was also introduced, the Ranchero. 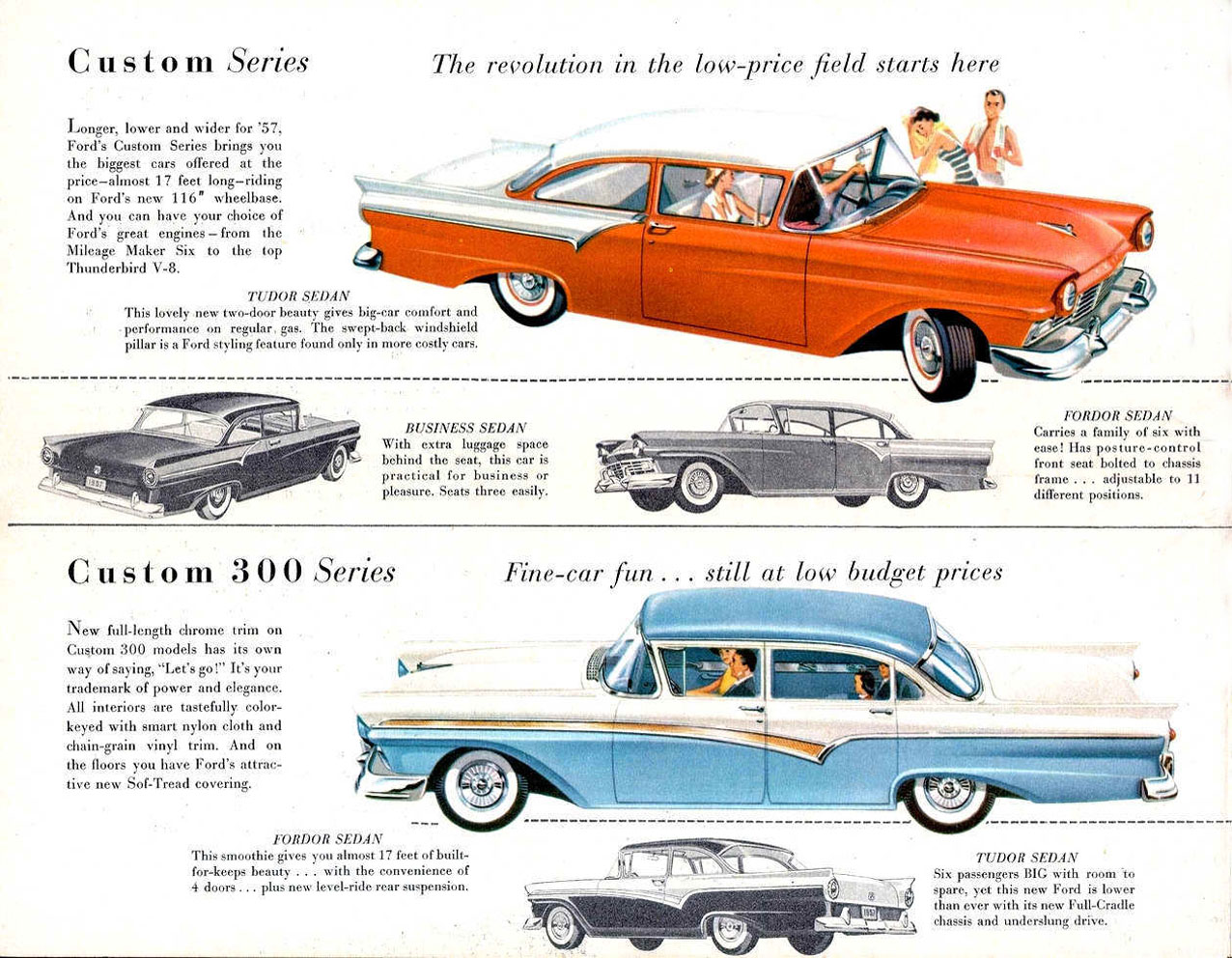 A dual 4 barrel version of the naturally. aspirated 312 cubic inch V8 rated at 270 HP was reportedly available, although that engine option was not listed in most Ford sedan factory literature and is more commonly associated with one of the optional Thunderbird engines. This option was dubbed "E code" and featured a unique camshaft, cylinder heads, intake manifold and various other performance enhancements. It came standard with the deep-dish steering wheel. The radio became transistorized. There were lights for the generator and oil instead of gauges.

A new frame was used for the 1957 Fords. It moved to perimeter rails out, so that they would fully envelope the passengers.In a survey of 1957 Ford owners in the March, 1957 issue of Popular Mechanics, only 6.2% of owners ordered seat belts. 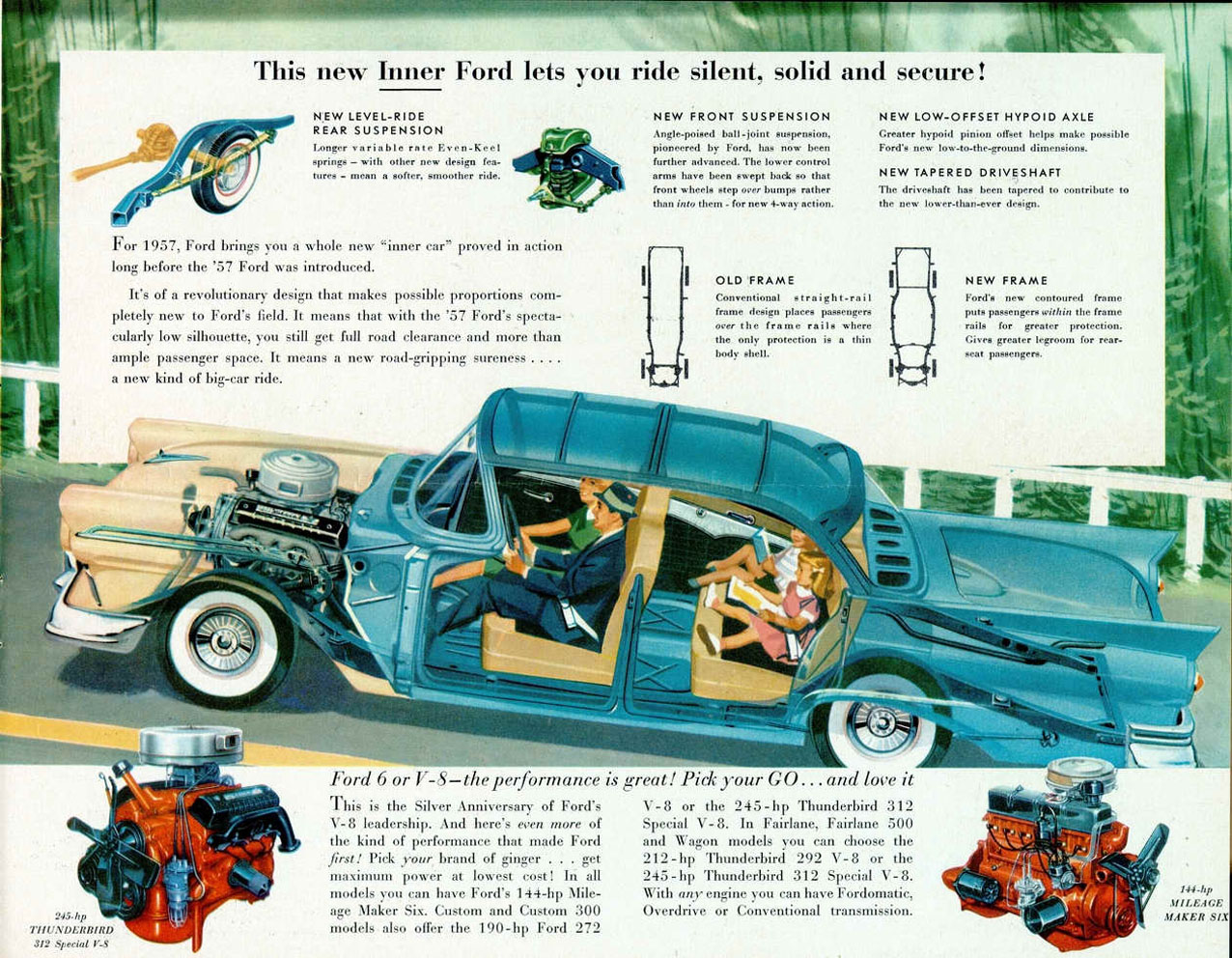 This model was very successful, being the best selling car in America, overtaking arch rival Chevrolet for the first time since 1935.

Compared to its immediate predecessors, the 1957 Ford looked as different from the inside as it did on the outside. Slipping behind the wheel, you surveyed the new near-flat hood-line through a lower and wider wrapped windshield. Instead of the vertical placement of 1955-1956, the A-pillars angled back toward the bottom more noticeably and sometimes painfully: the "dogleg" was a knee-banging nuisance on most mid-Fifties Detroiters. 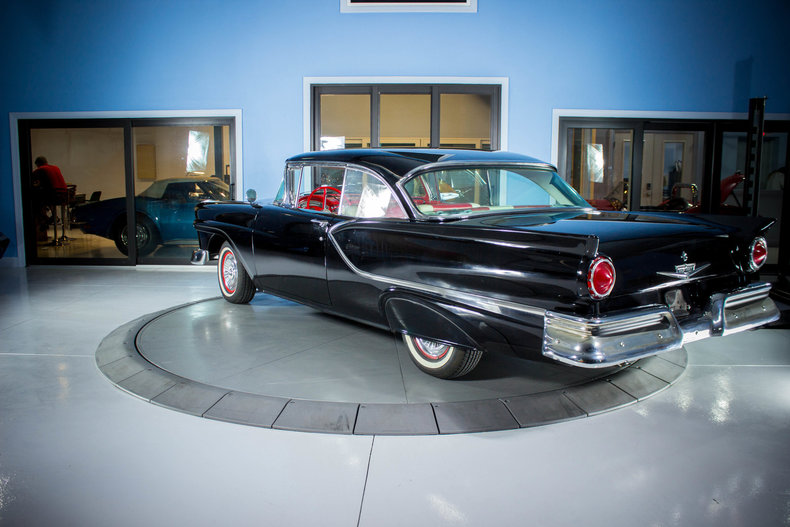 The dashboard was all-new but still pleasingly simple. A slightly curved "strip" speedometer flanked by fuel and engine temperature gauges formed an arc under a wider instrument "visor" just ahead of the deep-dish steering wheel, which was slightly smaller and lower-set than the 1956 helm.

The 1957 Ford garnered mostly glowing reviews. Motor Trend magazine's was typical. After testing a Fairlane sedan with standard shift and the 245-horsepower Thunderbird Special V-8, the editors reported: "From 0 to 60 it took 9.5 seconds (two seconds quicker than last year's Fordomatic-equipped test car), which is real rapid time in anyone's book. With a car as new as this, we were more than anxious to see what kind of roadability was built into it, especially in view of the obviously lowered center of gravity. We started...on exceptionally rough roads and noticed a definite improvement in spring and shock action over 1956. On rather smooth roads, we noticed a minimum of nose dip when braking. The brakes seemed smooth and positive. Violent cornering brought out the advantages of a low center of gravity. The new Ford really sticks. Body lean is modest, and with the built-in oversteer, you get a feeling of confidence in the car's ability to do your bidding."

1957 proved a tremendous year for Ford. New muscle and the tasteful "longer-lower-wider" styling had great appeal in a strong sales year, and production hit a record 1.67 million units for the model year, 170,000 more than Chevrolet. Convertible output also set a record: 77,726 of the conventional soft-top Sunliners plus another 20,766 of the new Skyliner retractable hardtops.

So give us a call at 941-254-6608 or check out our other vehciles here: https://www.skywayclassics.com/vehicles